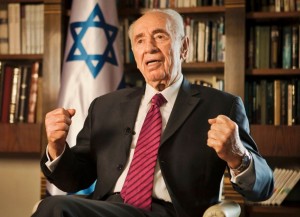 Israel has lost a founding father, a light for peace.

A Condolence Page has been created at ShimonPeresCondolences.com

Shimon Peres was one of the founders of the State of Israel, and was instrumental in building and developing Israel’s defense and security industry, establishing the IDF, developing the nuclear reactor in Dimona and the nuclear research facility at Sorek, and heading the Israeli defense industry.

Furthermore, he has worked tirelessly for decades to promote peaceful relations within Israel and between Israel and its neighbors, and was at the forefront of transforming Israel into a technology powerhouse and global leader in innovation. At 93, Peres is a statesman, the Ninth President of the State of Israel, the Prime Minister of Israel, a Nobel Peace Prize Laureate, a man of action, and a man of vision.

His public service began at the age of just 24, when he was recruited by Israel’s first Prime Minister, David Ben-Gurion, with the mission of breaking the embargo and arming the military.

He was appointed Director General of the Ministry of Defense at the age of 29, and began secretly developing the nuclear reactors in Dimona and in Sorek, which remain central to the defense and deterrence capabilities of Israel to this day. During this period, together with Ben-Gurion and Moshe Dayan, Peres was one of the initiators of Operation Sinai (Operation Kadesh), entered a military agreement with France and England, and established security relations with Germany, thus bringing in large quantities of weapons to arm the military.

Peres also became the father of Israel’s strategic relationship with France. Following the imposition of a military arms embargo, this relationship allowed Israel to obtain advanced weaponry, acquire vital intelligence and technology, and establish its own defense industries, without which the nation may not have survived. In parallel, Peres was also working to establish the Israeli Air force.

As Minister of Defense in 1976, Peres planned and oversaw the release of Israeli hostages in Operation Entebbe, a military operation that is recognized as one of the most daring and successful of the twentieth century and in the history of Israel. In the days following the abduction, Minister of Defense Peres worked tirelessly on this unprecedented military operation to free the hostages, demonstrating his decisive leadership and emphasizing that, in no way, would he give in to terrorism.

Along with his contribution to strengthening and building Israel’s defense, Peres has worked for decades to promote peace within Israel and between Israel and its neighbors. As Minister of Defense in 1974, Peres conducted the negotiations on the Sinai Interim Agreement with Egypt, and his secret meetings with King Hussein led to the signing of the historic treaty between Israel and Jordan under the government of Yitzhak Rabin.

As Foreign Minister in 1994, Peres laid the foundations for future peace agreements between Israel and the Palestinians. In 1996 Peres founded the Peres Center for Peace to promote peaceful relations and shared-living between Arabs and Jews and Israelis and Palestinians, and in July of 2016 he laid the cornerstone for the establishment of the Israeli Innovation Center at the Peres Center for Peace in Jaffa, together with the Prime Minister and President of Israel.

As Prime Minister (1984-1986), Peres turned Israel’s economy around and saved it from collapse following the worst economic crisis in its history, with a peak inflation of over 400% per year, through his Economic Stabilization Program. Peres believed that it was the right of every Jew in the world to live in Israel. As Prime Minister, he worked to open the gates of the Former Soviet Union and enable the immigration of Soviet Jewry to Israel, oversaw Operation Moses, during which 8,000 Ethiopian Jews were brought to Israel, and pushed for the release of the Prisoners of Zion (a term for Soviet Jews and Refuseniks imprisoned for Zionist activities).

Shimon Peres is among the founders of Israel’s high-tech industry, which has led the country to become the technological powerhouse that it is today – the Startup Nation. As Prime Minister, Peres was the first to recognize the potential of computer software as an export (a decision that laid the foundation for the high-tech industry). Over the years, he has advanced the world’s perception of Israel as a science and technology superpower, and brought about the development of Israel’s scientific research, thus pioneering advancements in important fields such as neuroscience, robotics and nanotechnology.

In 2007 Peres was elected by the Knesset to serve as Israel’s 9th President, becoming the first President to also have served as Prime Minister. During his presidency, Peres was admired and respected for his unprecedented work with Israel’s diverse and multicultural population, as he advocated for strengthening Israeli society, promoted Israel’s international standing, and established institutions to encourage Israeli entrepreneurial and scientific breakthroughs.

These initiatives included: awarding the Presidential Medal of Distinction to Israelis and world leaders who worked for the benefit of the State of Israel, establishing an education program entitled Future Scientists and Inventors, and providing scholarships of excellence to leading researchers.

Around the world, Peres is seen as a visionary leader representing the best of Israel. His work to advance the State of Israel in the world over the years, and to lay the foundation for future peace agreements between Israel and the Palestinians, is appreciated worldwide. His work has been recognized through being presented with the Nobel Peace Prize, as well as receiving medals and honorifics from global, national, and religious leaders the world over.

He was granted honorary citizenship of the Knights of the Franciscan Monastery of Assisi by the Pope, was made a Knight of the Order of St. Michael and St. George by Queen Elizabeth of England, and received the Congressional Gold Medal and the Presidential Medal of Freedom, which was awarded to him by President Barak Obama. Peres was the first and only Israeli head of state to ever receive this honor.

Peres is a man of thought, of conviction, and of strength, an author of poetry and countless books and articles. He was born as Szymon Perski on the 20th of Av, 5674 (August 2, 1923) in the town of Vishnyeva, Belarus (then Poland). He immigrated to Israel in 1934, studied at Balfour and Geula in Tel Aviv, and was then educated in the Ben-Shemen youth village. In 1941 he was sent for training to Kibbutz Geva with a group from Ben-Shemen, and later joined Kibbutz Alumot in the lower Galilee. In the beginning, he worked as a shepherd and a farmer.

He was married to Sonya (nee Gelman) in 1945, and they have three children: Prof. Tsvia Walden – a linguist and professor, Dr. Yonatan Peres – a veterinarian, and Nehemia (Chemi) Peres – a businessman and co-founder of leading Israeli venture capital and technology firms. They have eight grandchildren and three great-grandchildren. His wife, Mrs. Sonya Peres, passed away in 2011.

Message from the Prime Minister’s Office:

The Government Press Office (GPO) will operate a media center for the convenience of foreign journalists at the GPO building in the Jerusalem Technology Park (Malha; Building #4, fourth floor). The center will include live broadcasts, background materials (including historical photographs) and photographs from the above three locations and will operate from 08:00 tomorrow morning until the conclusion of the funeral at approximately 13:30 Friday afternoon.

The schedule is as follows:

At 08:45, President Reuven Rivlin, Prime Minister Benjamin Netanyahu and Knesset Speaker Yuli Edelstein will pay their respects before the coffin.

Justin Trudeau: Shimon Peres was, above all, a man of peace and a man dedicated to the well-being of the Jewish people.

Over the course of his long and distinguished life, Mr. Peres made enormous contributions to the founding and building of the State of Israel. He was devoted to promoting understanding between his country and its neighbours, and shared a Nobel Peace Prize for his efforts to create peace in the Middle East. Mr. Peres was an internationally-respected statesman and a great friend to Canada. He visited our country often, and helped build relations that remain strong to this day. On behalf of all Canadians, Sophie and I offer our deepest condolences to the family and friends of Mr. Peres – and to the people of Israel. His legacy as a tireless advocate for peace will not be forgotten.

Narendra Modi: “In former President Shimon Peres, we lost a key world leader & a friend of India. Pained by his demise. Our condolences to people of Israel.”

Malcolm Turnbull: Australia mourns the passing of Shimon Peres, his life was as eventful as it was long: his passion for the State of Israel, which he helped found, as strong as his commitment to peace. He was awarded the Nobel Prize for Peace for his efforts in support of the Oslo Accords and for his continued pursuit of peace for Israel with its neighbours.
When Lucy visited Shimon Peres recently, he told her the secret of perpetual youth was to ensure that your list of dreams always remained longer than your list of achievements. On that test, Shimon Peres remained the youngest of leaders.

Federica Mogherini: “I’m heartbroken by the death of President Shimon Peres, a man of peace, and an immense source of inspiration. President Shimon Peres has never lost hope in peace, and has never stopped working to turn hope into reality. Even in the darkest moments his wit, his irony, his obstinate pursuit of dialogue have been a source of inspiration for many around the world, including myself. President Peres believed that the best way to serve the State of Israel and to deliver security to the Israeli people was through peace with the Palestinians. We can only honour his memory with a daily commitment to reconciliation, preserving and advancing his vision for a two-State solution.​”

Tony Blair: “I am more sad than words can express. This is a man who was a political giant, a statesman who will rank as one of the foremost of this era or any era, and someone I loved deeply.
He was an inspiration, a mentor and a friend. His intellect, his way with words that was eloquent beyond description, his command of the world and how it was changing were extraordinary. Though he grew older his spirit never did.
Above all, his commitment to peace and his belief that it was in the interests of the country he adored marked him out as a visionary whose vision was never dimmed or displaced. He saw every setback as a spur to further action and every moment of hope as a sign of what could be done.
The whole world will mourn his passing but his memory will live on to inspire future generations to walk in his path.”

Barbara Streisand: President Shimon Peres was a voice of reason who also happened to have the sensibility of a poet…thoughtful and soft-spoken, but his words echoed loudly around the world. His mind was expansive and his heart was compassionate. He was a brilliant statesman, gifted with the ability to listen to others who did not share his views and still remained determined to find a path forward.

President Obama: “Shimon was the essence of Israel itself—the courage of Israel’s fight for independence, the optimism he shared with his wife Sonya as they helped make the desert bloom, and the perseverance that led him to serve his nation in virtually every position in government across the entire life of the State of Israel. As Americans, we are in his debt because, having worked with every U.S. president since John F. Kennedy, no one did more over so many years as Shimon Peres to build the alliance between our two countries—an unbreakable alliance that today is closer and stronger than it has ever been.”