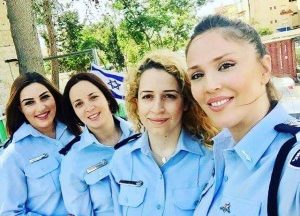 Israel has one of the most diverse,
inclusive police forces in the world.

If you had not stated that you were a Jew and Zionist, that your father had worked for the ADL, I would not be writing this letter.

You appear to be a good man, but lacking knowledge on several historical facts.

As the ADL states: “The charge that American police exchange programs play a role in political militarization and oppression is malicious and false. This effort was orchestrated by one of the most vocal anti-Israel hate groups in America without any attempt to gain the facts from other mainstream organizations and law enforcement leaders themselves who can attest to the value of these exchange programs.”

The ADL statement which appears in Durham’s Herald Sun newspaper continues: “The Durham City Council is empowered to act on a variety of topics, but it should never do so based on maliciously erroneous assertions. Here the Council failed to do its due diligence in separating truth from propaganda.”

There is no occupation of “Palestinian land”.
There was a war in 1967 and Israel won that war.

Under international law, there is no occupation of Jerusalem, the West Bank or what we in Israel refer to as Judea and Samaria.

As for Gaza – there is no occupation – not one Israeli civilian or solder is there.

In 2005 Israel unilaterally left Gaza in a peace move which resulted in Hamas rockets being fired at Jewish civilian communities in Israel.
It was never about land. It is Jihad, the same Jihad that brought us 9/11.

Gaza is ruled by Hamas – defined as a Foreign Terror Organization by the United States Department of State.

The term “occupation” came into being by Yasser Arafat in 1967 and has been used as a propaganda tool for Israel’s destruction ever since.

But even given that legally there is no occupation – Israel continues to reach out for peace. A Palestinian state has been rejected by the Arabs 5 times since 1948.

There truly is no Israeli – Palestinian issue. It is an Israeli – Iranian issue as Iran directly funds Hamas in Gaza and Hezbollah in Lebanon.

As one of the leading facilitators of police exchanges between America and Israel, the Anti-Defamation League (ADL) works closely with law enforcement in the U.S., training thousands of law enforcement officials to identify and investigate hate crimes, as well as extremist and terrorist threats against all vulnerable groups in our society. The ADL also trains thousands of federal, state and local police each year on managing implicit bias, and the role of police as protectors the people – all people – and of the Constitution and individual rights.

ADL’s law enforcement programs are well-respected and recognized by the nation’s leading law enforcement agencies, including the Federal Bureau of Investigation. They are designed to equip officers with the knowledge, understanding, and sense of accountability necessary to help safeguard all communities and ensure that everyone’s civil rights and liberties are rigorously protected. And ADL submitted testimony for the Obama Administration’s forward-looking Task Force on 21st Century Policing on how to address police misconduct and how to advance police-community relations.

Lastly, I served as a humanitarian officer in the IDF for over 16 years.

We are not a perfect army but we do provide basic respect with all we come into contact with. We do not indiscriminately shoot civilians. In fact we risk our lives at security check points and on our borders not to injure and or shoot civilians as Hamas and Hezbollah use civilians as human shields. We provide tons of humanitarian aid on a daily basis to Gaza.

I implore you to rethink the resolution that you and the Durham city council just passed.

I can assure you that if the ADL and several other Jewish organizations are in complete agreement (something they never are) that singling out Israel constitutes anti-semitism – please listen to them. It demonizes Israel and plays right into the BDS playbook. Never mind that it was used only as a quote in your Council’s statement or you were just referring to Israel’s police and IDF.

Mayor Schewel, you had anti-semitism thrown in your face at that council meeting. You didn’t tolerate it. I kindly ask you to remove Israel’s name in a resolution that singles out Israel in regards to police training – unless of course you care to add a few dozen nations that also provide security training to the US to that list.

As a Jew, as a Zionist, as a human – I and many others are prepared to find the resources to create an economic and cultural boycott of Durham.

Hate can start with Durham and spread like a cancer.

When Israeli Arabs chant: “From the River to the Sea” – they are not referring to from the Mississippi to the Atlantic.

Hate must not find an anchor in Durham, North Carolina.