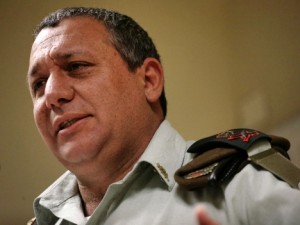 Jerusalem, Israel — November 30, 2014 … Part of the following was communicated by the Prime Minister’s Office to the Israel News Agency.

At the weekly Cabinet meeting today in Jerusalem, Prime Minister Benjamin Netanyahu made the following remarks:

“We are making great efforts to restore calm and tranquility to Jerusalem. Of course, we will not tolerate attacks from any quarter and we will not tolerate setting fire to a bilingual school as we saw last night. We condemn any such attempt and we will act as vigorously – and with as much unity – as possible to restore quiet and law and order in all parts of the city.

Israel Defense Minister Moshe Yaalon and I consulted over the past week and decided to submit to the Cabinet the appointment of Maj.-Gen. Gadi Eisenkot as the next IDF Chief-of-Staff. Gadi is an experienced officer. He has gone through all levels of command and he will shoulder a very great security mission as the IDF operates in various sectors, with growing challenges. He will be assisted by the next IDF Deputy Chief-of-Staff, Maj.-Gen. Yair Golan, who is also among our most experienced and talented officers.”

Israeli opposition leader Isaac Herzog (Labor) welcomed the appointment, describing Eisenkot “a brilliant officer who is not afraid to speak his mind.”

An infantryman from the Golani Brigade who stood out during the Second Lebanon War for his sober and calm reading of the situation, Eisenkot was notified that he had been given the post by Netanyahu on Friday morning. He is set to take up the position on February 15, succeeding Lt. Gen. Benny Gantz.

Of course, the security of Israel is conditional on the defense budget. We added NIS 6 billion to the defense budget. This supplement is essential in order to prevent vital IDF units from having to suspend operations and to enable them to function properly. This supplement must be carried out; it cannot be emptied of content, it cannot be cancelled due to its being reduced for other goals. It must be designated for the IDF and for strengthening the IDF.

Today, we will also submit a unique law to the Cabinet, which will provide for the integration of up to 3% handicapped individuals in the public service. I think that this is a socially just law, a humanitarian law of the first order, and it shows the disabled that their disabilities need not prevent them from participating as equal members, and contributing as equals, in the public service of the State of Israel.

All of the foregoing are among the major tasks that are before us. In order to carry them out there needs to be government stability and proper administration. This is urgent for the citizens of Israel and also necessary for the State of Israel. To my regret, this is not what is happening here. Recently, hardly a day passes without us running into diktat or threats or threats of resignation or ultimatums and such as ministers attack the government and its prime minister. I hope that we will be able to return to proper conduct. This is what the public expects of us because only thus is it possible to run the country, and if not, we will draw conclusions.”

Pursuant to Article 31c of Basic Law: The Government, the Cabinet decided to unify the Intelligence Affairs and Strategic Affairs ministries as the Intelligence Ministry. The foregoing shall be submitted for Knesset approval.

The Cabinet decided to appoint Ran Ben-Barak as Director General of the Israel Intelligence Ministry effective 7 December 2014, subject to Knesset approval referred to in item #3 above.

Pursuant to previous Cabinet decisions, the Cabinet decided to set a five-year term for the position of Finance Ministry Director General and Accountant General.

The Cabinet discussed and approved plans for the development of the community of Arab al-Naim in the Misgav Regional Council area.

The Cabinet approved Prime Minister Benjamin Netanyahu’s and Civil Service Commissioner Moshe Dayan’s proposal to increase the employment of people with disabilities in the civil service.

The Cabinet approved draft amendments to the 2014 Prevention of Illegal Migration and Ensuring the Departure of Illegal Migrants and Foreign Workers from Israel Law and authorized the Ministerial Committee on Legislation to approve the final version of the law and submit it for Knesset approval.