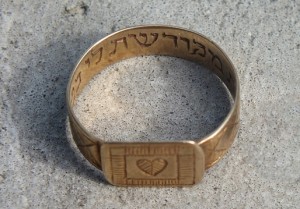 “The most emotional moment was when we found, near the gas chambers, a wedding ring inscribed with a Hebrew wedding vow,” said archaeologist Haimi, whose relatives were murdered in the camp.

Jerusalem — September 17, 2014 … An archaeological dig in Poland has exposed the location of the gas chambers at the Sobibor death camp, the Yad Vashem Holocaust Memorial announced today.Over 250,000 Jews were murdered at Sobibor, but on October 14, 1943, about 600 prisoners revolted and briefly escaped. Between 100 and 120 prisoners survived the revolt, and 60 of those survived the Holocaust. After the camp uprising, the Nazis bulldozed the area and planted it over with pine trees to conceal their crimes.The archaeological dig at the Nazi death camp, which has been carried out by an international team of experts since 2007, has in the past uncovered thousands of personal items belonging to those interned at the camp, including jewelry, perfume, medicine and utensils.A well was uncovered this week which was used by the Jewish prisoners in Camp 1, where the revolt took place. The well contained several personal items belonging to Jewish prisoners because German guards had thrown trash into it when the camp was being destroyed.Dr. David Silberklang, a senior researcher at the Yad Vashem International Institute for Holocaust research said: “The discovery of the exact location of the gas chambers at the Sobibior Camp is a discovery of the utmost importance in Holocaust research.”He said it was important to understand that “there are no remains from any Jews who worked in the area of the gas chambers, and therefore these findings are the only thing left from those who were murdered.”Silberklang stated: “a small window has been open into their daily suffering.”He said for the first time researchers would be able to better understand the murder process in the camp and what the Jews went through before their death.“Finding the exact size of the gas chambers will enable us to understand what their capacity was and from there we can determine a more precise estimation of the number of people killed at the Sobibor Camp,” Silberklang said. 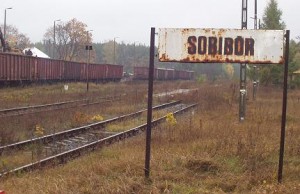 He said the finding will also help fill in the puzzle of what happened to the prisoners who escaped from the camp during the rebellion.Archaeologist Yoram Haimi said they were surprised at the size of the structure that housed the gas chambers and how well the chambers’ walls were preserved.“The most exciting part is that we found near the gas chambers wedding rings with the inscription in Hebrew “Hare at mekudeshet li” (Behold, thou art consecrated to me).”

The Holocaust (also called Ha-Shoah in Hebrew) refers to the period from January 30, 1933 – when Adolf Hitler became chancellor of Germany – to May 8, 1945, when the war in Europe officially ended. During this time, Jews in Europe were subjected to progressively harsher persecution that ultimately led to the murder of 6,000,000 Jews (1.5 million of these being children) and the destruction of 5,000 Jewish communities. These deaths represented two-thirds of European Jewry and one-third of all world Jewry.

The Jews who died were not casualties of the fighting that ravaged Europe during World War II. Rather, they were the victims of Germany’s deliberate and systematic attempt to annihilate the entire Jewish population of Europe, a plan Hitler called the “Final Solution” (Endlosung).

Yad Vashem (יָד וַשֵׁם) is Israel’s official memorial to the victims of the Holocaust, established in 1953 through the Yad Vashem Lawpassed by the Knesset, Israel’s parliament.

Yad Vashem is located on the western slope of Mount Herzl on the Mount of Remembrance in Jerusalem, Israel. The memorial consists of a 180-dunam (18.0 ha; 44.5-acre) complex containing the Holocaust History Museum, memorial sites such as the Children’s Memorial and the Hall of Remembrance, The Museum of Holocaust Art, sculptures, outdoor commemorative sites such as the Valley of the Communities, a synagogue, a research institute with archives, a library, a publishing house, and an educational center named The International School/Institute for Holocaust Studies.