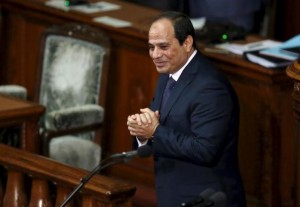 Jerusalem, Israel — May 17, 2016 … The following was communicated by the Prime Minister’s Office to the Israel News Agency.

“I welcome Egyptian President El-Sisi’s remarks and his willingness to make every effort to advance a future of peace and security between us and the Palestinians and the peoples of the region. Israel is ready to participate with Egypt and other Arab states in advancing both the diplomatic process and stability in the region.”

Netanyahu added: “I appreciate President El-Sisi’s work and also draw encouragement from his leadership on this important issue.”

Israel was responding to el-Sisi following a resolution passed by the United Nations cultural body UNESCO last month that failed to acknowledge Jewish ties to the Temple Mount in Jerusalem.