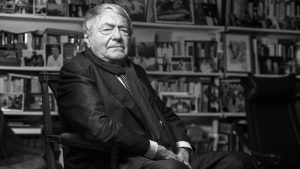 Jerusalem, Israel — July 5, 2018 … World-renowned filmmaker and director Claude
Lanzmann passed away earlier today at the age of 92 in France.

Lanzmann was born in Paris, France in 1925 to Jewish immigrants from Eastern Europe. His family went into hiding during World War II. He later joined the French resistance at the young age of 17.

Claude Lanzmann is most known for his non-fiction work entitled Shoah, which has
become one of foremost films in Holocaust remembrance since its release in 1985.

Shoah, a Hebrew word, eludes easy definition. It has bedeviled translators, who have wrestled its multitudes into grim English stand-ins such as “catastrophe” or “calamity” or “annihilation.” But no single term quite manages to bear the word’s weight.

“The truth is that there is no name for what happened. During the 12 years of my work, I had no name to name what I called – inside my heart, I called it ‘the thing,’ ” Lanzmann said, finding his words through his thick French accent. “How could exist a name for something which had never existed in human history?”

Lanzmann was a man of strong convictions.

He rejected the word “Holocaust” — literally, “burnt offering” — as a description of the genocide. He railed against its “commodification” in films like “Schindler’s List.”

He believed that Polish anti-Semitism was an “essential condition” of the genocide; indeed, the lack of anything in “Shoah” that would cast Poles in a better light led the Warsaw government to demand that the film be banned after its premiere in Paris.

Shoah marks a tectonic shift in Holocaust cinema—rejecting archival footage, docu-
drama, and all other genres, Lanzmann insisted on focusing on testimonies of
Holocaust survivors who had been closest to the mass murder of their people.

“Shoah is a work about the present, representing the way those who were there live
with trauma and the memory of it,” stated Yad Vashem Visual Center Director Liat
Benhabib.

“Holocaust films of all genres changed after Shoah, which also served to
shine a spotlight on survivor testimony in an unprecedented scope and manner.”

“Claude Lanzmann’s cinematic work left an indelible mark on the collective memory,
and shaped the consciousness of the Holocaust of viewers around the world, in
these and other generations,” said Yad Vashem Chairman Avner Shalev.

“His departure from us now, along with our recent separation from many Holocaust
survivors, marks the end of an era.”

Yad Vashem, the World Holocaust Remembrance Center, was established in 1953.
Located in Jerusalem, it is dedicated to Holocaust commemoration, documentation, research and education. www.yadvashem.org