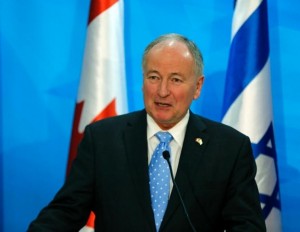 Our friendship, the friendship between Canada and Israel, is a model of the partnership between two democracies, exemplary democracies. Israel values the support, unstinting, unfaltering, of Canada in an international environment that is often marked by cynicism and double talk. Canada, led by Prime Minister Harper, is always stalwart and tells the truth. And we think that this is a refreshing wind in an increasingly hostile environment, hostile to the truth.

As an example, a national student group in Britain voted to support a boycott of Israel. This is less than a year after they refused to support a boycott of ISIS. They boycott Israel but they refuse to boycott ISIS. That tells you everything you want to know about the BDS movement. They condemn Israel and do not condemn ISIS; they condemn themselves.

Israel has an exemplary democracy. We have academic freedom, press freedom, human rights. ISIS tramples human rights to the dust. It burns people alive in cages and the national student groups in Britain refuse to boycott ISIS and have boycotted Israel. It tells you everything you want to know about the BDS movement.

I stress these points, Rob, because Canada stands out so clearly and so powerfully against these distortions of truth and distortions of justice, and I want to express the feeling of the people of Israel that we believe we have no better friend than Canada. We value that partnership. It was exemplified last week, two weeks ago, in the vote of Canada, alongside the United States and Great Britain, in rolling back the attempt to single out Israel in the NPT votes. That is deeply appreciated here.

So we welcome you here in challenging times, sometimes perilous times, but in days when we know that the best defense against the democracies, the attack on the democracies, is the partnership of democracies, as exemplified by our two countries.”

“I am here to demonstrate, emphatically, Canada’s unwavering support for Israel,” he said.

“We understand that Israel’s neighbourhood is as dangerous as Canada’s is peaceful, and so we know that Israel’s leadership has no choice but to take at all times, every step necessary to protect itself from the forces that are openly committed to its destruction.”

“We’ve long refused to be neutral in supporting Israel’s right to defend itself against violent extremists,” Nicholson said.

“Any who turn their back on Israel, or turn a blind eye to the nature of Israel’s enemies, do so in the long run at their own peril.”