One can easily find the answer on Twitter or Facebook. Just look for someone yelling that Israel is a criminal, Apartheid state responsible for dozens of massacres, torturing sweet, Palestinian babies and creating dark sandstorms.

Ariel Gold, national co-director of US extreme left-wing activist group Code Pink and an advocate of the Boycott Divestment Sanctions (BDS) movement, holds a Masters degree in Social Work.
She knows how to professionally manipulate public opinion. Gold knows how to incite Palestinians to violence and terrorism.

The official reason given by Israeli security is that she supports the BDS movement.

The BDS movement was founded in 2005 by Omar Barghouti and asserts that it “works to end international support for Israel’s oppression of Palestinians and pressure Israel to comply with international law.”

Major Jewish organizations, including the ADL, condemn the BDS movement for an anti-Zionist position which masquerades for anti-semitism.

Ariel Gold, claims to be Jewish. She even posts a photo of herself at her son’s Bar-Mitzvah.
But not to far from that photo is another of Gold standing next to the Western Wall.

No, Ariel Gold is not praying. Gold and a fellow Code Pink member unfurled a boycott Israel banner at Judaism’s ancient, most holy site, to declare that the Western Wall and all of Jerusalem is occupied. 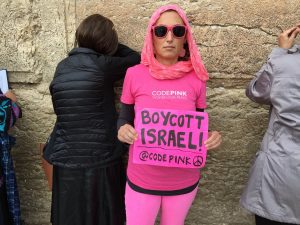 Rules and laws don’t seem to apply to this Master’s of Social Work.

In 2015, Gold coordinated a 5-week U.S. speaking tour for Palestinian propagandist and provocateur Bassem Tamimi, whose U.S. visa has since been revoked. The tour was organized by Jewish Voice for Peace, FOSNA, and IFPB.

Gold brought Tamimi to a third-grade classroom in Ithaca, New York, where he encouraged grade-school children to become “freedom fighters for Palestine.” An investigation by the Ithaca City School District determined Tamimi’s anti-Israel presentation to the 8 and 9-year olds to be “politically skewed” and “inflammatory.”

Bassem Tamimi has exploited young children as political props in staged confrontations with Israeli soldiers. In 2011, he was jailed for organizing violent rallies and inciting minors to commit violent crimes such as rock-throwing.

Her blood libels know no limit, no borders.

She quotes Prime Minister Netanyahu for saying: Israel is a state for Jews only when in fact Netanyahu stated: “Israel shares a love of freedom and democracy. We cherish individual rights and the rule of law. We don’t judge people by the color of their skin, their religion, or their sexual orientation.”

But the one thing that really gets to thousands of Israelis, Jews and Christians worldwide is Gold calling Israel an Apartheid state. One South African who lived through Apartheid had an immediate response on Twitter:

Lourė Basson‏ @lourebas
Replying to @ArielElyseGold
I live in South Africa, you do not know what Apartheid is, You are a Disgrace to Black South Africans and an Instant to them that suffered under Apartheid! Left is not Liberal
8:11 AM – 31 Mar 2019

Gold does not respond. She throws rocks, talking points and soundbytes and disappears.
The Israel News Agency asked her for comment. She refused.

So what is it that attracts hundreds of Jews online – from the Israeli government to global citizens to subject themselves to her verbal abuse and lies?

Ariel Gold is an attractive women. She has a soft smile. And she says she is Jewish.
Using the fact that she was born Jewish and has a Jewish sounding name, she is the classic wolf wearing sheep’s clothing.
So as family, many try to reason with her, debate her and even curse her.
Most psychologists would suggest – ignore her.

In fact, many believe that she suffers from narcissistic personality disorder.
She talks, she lies, she posts dozens of photos and videos of herself but never listens and rarely responds.

You can ask her if the Western Wall is occupied, describe the massacres and criminal acts that Israel is responsible for, illustrate examples of Apartheid, what borders does she suggest and all one receives is: “End the occupation, end the suffering, end the criminal acts.”

For us at the Israel News Agency, we witness hundreds of online attacks on Jews and the Jewish state.
We know Israel is not perfect, but then again we do not practice Apartheid, we do not gun down innocent civilians attacking the Israel Gaza border security fence, we cherish life, we don’t use our children as human shields.

What sets Ariel Gold and the Jewish Voice for Peace apart from Israel and the global Jewish community are the words: “Jewish”and “Peace”.

Ariel Gold, Code Pink, BDS, Jewish Voice for Peace and IfNotNow extreme Left wing groups are neither Jewish nor advocate peace. They want Israel to remove all security barriers and allow Hamas, Islamic Jihad, ISIS and Hezbollah to fulfill their open declarations of removing the hearts of all the Jews and to create a Palestine for Muslims only. That is true Apartheid.
These are the words of Jihad. Holy war against Jews and Christians.

Gold recently attacked a person who responded to one of her many blood libels on Twitter.
The person she targeted turned out to be a terror victim. She had been walking with a Christian friend in a forest in Israel when an Islamic terrorist repeatedly stabbed them both. Her Christian friend was thought to be Jewish and a fair target and bled to death in that forest.

Kay Wilson, who survived being stabbed 13 times, had the following response for Ariel Gold.
I believe her response represents thousands of Jews around the world who are proud of the only democracy in the Middle East and ashamed of those who call themselves Jews as they incite anti-semitism and terrorism:

“Massacres in Gaza”? You should be ashamed of yourself for spreading heinous lies. Grow up, stop seeking attention like a 5-year old. It’s very unbecoming. Oh, go ahead and block me too.” 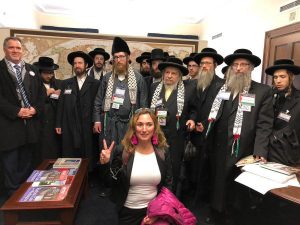 Ariel Gold poses with the extreme Jewish organization
Neturei Karta, which advocates the death of all Jews in Israel.

Ariel Gold who spits on the Western Wall, supports Iran and her terror proxies Hamas and Hezbollah, threatens the Jewish state with BDS and ignores Jewish victims of terrorism, needs to be blocked by us all. She is a Jihadist. There is no debating with her. Only the block button on Twitter and Facebook. As several, global news media channels practice not to mention the name of a terrorist to provide them with fame and glory, we must do the same here.

As a matter of professional practice I always suggest to engage.
Engage with respect in a polite manner. Attack the issues, not the person.
When you come across Jihadists such as Gold, Jewish Voice for Peace and IfNotNow and there is no room for dialogue – move on.  Do not give them the attention, the public relations they so badly beg for.