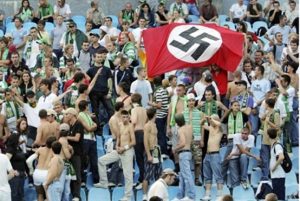 Brussels — December 7, 2018 … The American Jewish Committee (AJC) praised the Council of the European Union unanimous adoption of a statement on combating anti-Semitism across Europe. It is the first time the Council’s 28-member states have passed a comprehensive measure aimed at coordinating counter anti-Semitism actions and to assure the safety of European Jews.

In its declaration, the EU Council acknowledges that Jewish communities in some European Union countries feel particularly vulnerable to lethal terrorist attacks, following an increase in violent attacks in recent years. It notes that anti-Semitic hatred remains widespread, as confirmed by the E.U.’s 2018 Fundamental Rights Agency report on anti-Semitism.

“The EU has taken a historic step toward fighting all forms of hatred targeting Jews,” said Daniel Schwammenthal, Director of the AJC Transatlantic Institute, the Brussels-based arm of AJC, the global Jewish advocacy organization.

“Significantly, the 28 EU member states have jointly recognized the severity of continuing threats to Jews, the need to protect Jewish institutions and communities, and the value of the International Holocaust Remembrance Alliance (IHRA) Working Definition of Anti-Semitism.”

The Council Declaration asks member states “to adopt and implement a holistic strategy to prevent and fight all forms of anti-Semitism.” It expresses EU determination to “ensure a future for Jewish people to live with the same sense of security and freedom as all other citizens in the European Union.” And it calls on EU member nations that have not yet adopted the IHRA working definition to endorse it.

The World Jewish Congress said in a statement that it worked for several months with the Austrian government and European institutions, as well as the EJC, to draft the declaration.  It applauded the council for passing the declaration and called on the EU to appoint a Coordinator on Combating Anti-Semitism.

WJC President Ronald S. Lauder said: “I strongly welcome the decision by the Council of the European Union to adopt this important declaration on the fight against antisemitism and the protection of Jewish communities. Just days after polling revealed that antisemitism continues to haunt Europe, and with the memory of the Holocaust fading, this declaration is a clear recognition by the governments of all EU Member States that serious action, both politically and practically, is needed to deal with the clear and specific challenges posed by this ancient hatred. We look forward to continuing to engage with both the EU institutions and the governments of the EU Member States to inform this serious work going forward.”

In 2015, AJC convened in Brussels “A Defining Moment for Europe,” a strategy conference on combating anti-Semitism. The Call to Action adopted at the groundbreaking conference was updated in June 2018.

Israel’s Prime Minister Netanyahu had requested that the EU adopt the working definition of anti-Semitism issued by the International Holocaust Remembrance Alliance, an intergovernmental organization that was founded 20 years ago.

This definition states that some criticism of Israel is anti-Semitic, such as: “Denying the Jewish people their right to self-determination, e.g., by claiming that the existence of a State of Israel is a racist endeavor,” or by applying double standards to Israel not demanded of any other nation.

Some EU countries were concerned that this definition could prevent criticism of Israel’s residential and commercial activities in the Jewish state’s biblical and historical land in Judea and Samaria (West Bank). A compromise was therefore reached and the final statement calls on member states to use the IHRA definition as a “guidance tool,” without making it obligatory.