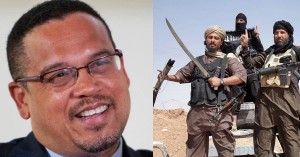 Ellison was responsible for defending 12 Muslims
from Minneapolis who wanted to join ISIS.

New York, NY — December 1, 2016 … The Anti-Defamation League (ADL), which only last month defended and described Rep. Keith Ellison as “a man of good character”, has now decided to expose Ellison for racist comments he has made against Jews.

In 2010, Ellison stated that US foreign policy was directed by Israel. By making this comment Ellison reinforced age-old racist stereotypes about Jewish control of the US government.

In 2014, Ellison was one of only eight members of Congress who voted against the bipartisan bill to provide $225 million to Israel’s “Iron dome” missile system. Ellison was supporting the ability of Islamic terror organizations such as Hamas and Hezbollah to launch missiles against cities and towns in Israel – the murder of Jewish civilians.

“When Rep. Ellison’s candidacy to be chair of the Democratic National Committee was first reported, ADL did not rush to judgment.  Instead, we took a hard look at the totality of his record on key issues on our agenda. We spoke to numerous leaders in the community and to Mr. Ellison himself. ADL’s subsequent statement on his candidacy appreciated his contrition on some matters, acknowledged areas of commonality but clearly expressed real concern where Rep. Ellison held divergent policy views, particularly related to Israel’s security.

New information recently has come to light that raises serious concerns about whether Rep. Ellison faithfully could represent the Democratic Party’s traditional support for a strong and secure Israel. In a speech recorded in 2010 to a group of supporters, Rep. Ellison is heard suggesting that American foreign policy in the Middle East is driven by Israel, saying: “The United States foreign policy in the Middle East is governed by what is good or bad through a country of 7 million people. A region of 350 million all turns on a country of 7 million. Does that make sense? Is that logic? Right? When the Americans who trace their roots back to those 350 million get involved, everything changes.”

Rep. Ellison’s remarks are both deeply disturbing and disqualifying.  His words imply that U.S. foreign policy is based on religiously or national origin-based special interests rather than simply on America’s best interests. Additionally, whether intentional or not, his words raise the specter of age-old stereotypes about Jewish control of our government, a poisonous myth that may persist in parts of the world where intolerance thrives, but that has no place in open societies like the U.S. These comments sharply contrast with the Democratic National Committee platform position, which states: “A strong and secure Israel is vital to the United States because we share overarching strategic interests and the common values of democracy, equality, tolerance, and pluralism.”

ADL is a non-partisan organization and does not support any political party; however, we deeply believe in the importance of bipartisan support for Israel.  Such support is crucial to ensure continued engagement with our most important ally in the region, a democracy whose emphasis on equality and commitment to the rule of law stands in stark contrast to the anarchy and authoritarian regimes that prevail in much of the Middle East. These shared values are the bedrock for the long-standing relationship between the U.S. and Israel.

Whoever it may be, we would hope that the next head of the Democratic Party would have fidelity to these timeless ideals at all times.”

Two weeks ago, Morton A. Klein, the President of the Zionist Organization of America (ZOA) urged that Ellison not be appointed to head the DNC. The ZOA clearly illustrated Ellison’s dangerous positions, involvements and anti-Israel congressional initiatives.