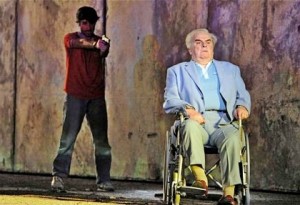 New York — October 20, 2014 … Over five thousand Jews and Christians are expected to turn out for a demonstration today against the opening of “The Death of Klinghoffer” Opera at New York’s Lincoln Center.

On Oct. 8, 1985, 69-year-old wheelchair-bound Leon Klinghoffer, was shot in the head by Palestinian hijackers on the Achille Lauro cruise ship. The terrorists brutally and unceremoniously threw his body and wheelchair overboard into the Mediterranean. His body washed up on the Syrian shore a few days later.

“The four terrorists responsible for his murder will be humanized by distinguished opera singers and given a back story, an ‘explanation’ for their brutal act of terror and violence. Opera-goers will see and hear a musical examination of terrorism, the Holocaust and Palestinian claims of dispossession — all in fewer than three hours,” said daughters Lisa and Ilsa Klinghoffer.

“Our father was one of the first American victims of Middle Eastern terrorism. Today with the memory of 9/11, the reality of al-Qaida and ISIS, and countless other attacks and threats, Americans live under the deadly threat of terrorism each and every day.

Terrorism is irrational. It should never be explained away or justified. Nor should the death of innocent civilians be misunderstood as an acceptable means for drawing attention to perceived political grievances. Unfortunately, ‘The Death of Klinghoffer’ does all of this and sullies the memory of our father in the process.” 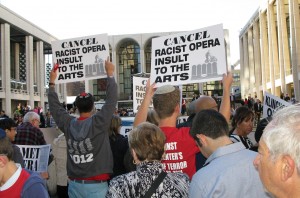 Former New York Mayor Rudy Giuliani will lead a press conference followed by a demonstration outside of the opening of “The Death of Klinghoffer” which is expected to premier at the Metropolitan Opera at Lincoln Center on Monday evening, October 20 at 5:00 PM.

Giuliani famously expelled Yasir Arafat from a concert for world leaders at Lincoln Center in 1995, explaining he could never forgive Arafat’s acts of terror.  As the Mayor famously said, “I would not invite Yasir Arafat to anything, anywhere, anytime, anyplace. He has never been held to answer for the murders that he was implicated in.”

Following the press conference, a coalition of organizations will gather, as thousands are expected to raise a voice of outrage against this opera which promotes terrorism and anti-Semitism.

Rabbi Avi Weiss and a group of Rabbinical leaders will hold a fast and prayer and vigil across from the Met beginning at 12:00 PM in memory of Leon Klinghoffer’s soul, being desecrated by the opera.

This is the continuation of a series of efforts opposing Lincoln Center’s decision to air this play.

There will be a press conference at Lincoln Center on Monday evening, October 20th at 5:00 PM, across the street from the Lincoln Center Plaza at Broadway & 65th Street to protest the first evening that “The Death of Klinghoffer” will be shown at the Metropolitan Opera.

The threat of protests has created fears that the scene could explode into chaos or violence, Met director Peter Gelb said.

“It’s been a steady diet of e-mails, phone calls and letters for a couple of months now,” Gelb told the Sunday Times of London. “The people who don’t want this opera to be performed are not silly; they are very angry.”

The opera features anti-Semitic language and at times tells the story from the terrorists’ perspective.

One aria in the show declares: “You are always complaining of your suffering, but wherever poor men are gathered they can find Jews getting fat.”

Protesters plan to set up 100 wheelchairs at the base of the entrance to the Met while wearing signs that proclaim, “I am Leon Klinghoffer,” said organizer Jeffrey ­Wiesenfeld.

“This opera is not just anti- ­Semitic but there is gratuitous anti-Semitism that is repeated and ­repeated,” Wiesenfeld slammed. “This is a game-changer.”