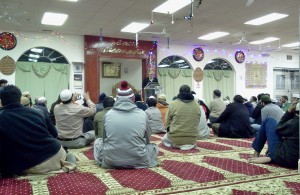 New England, USA — January 17, 2015 … The above mosque is not in Iraq, Syria, Turkey or Iran. But one would have wished it was. The speaker was Dr. Saud Anwar, mayor of South Windsor, Connecticut.

Saud Anwar is a physician who specializes in Lung Diseases and Critical Care Medicine. Currently, he serves as Chair of the Department of Internal Medicine of Manchester Memorial and Rockville General Hospitals. Dr. Anwar is involved in humanitarian and peace initiatives nationally and internationally. He is frequently invited to consult for the US government and has organized medical missions for disaster relief. Anwar is very well respected for his extensive humanitarian work in Haiti.

When not performing surgery, the Yale trained medical doctor, an expert on international affairs, is frequently invited to appear on national and international television and radio including CNN, NBC, Fox and Voice of America.

“The Koran teaches us to help our neighbors,” Anwar tells about 100 Muslim immigrants weighing each and every word he says. “The Koran states both Muslim and non-Muslim neighbors. Our holy Koran makes no differentiation.”

Anwar continues: “When we address social issues, we are taught by the Koran to use our voices, our hand and or our heart. When the Koran states “our hand” it is not advocating a hand of violence. It is directly commanding to give food to those who hunger, clothes to those who are cold and to build homes for those who are homeless. Those we hear about almost daily using their hands to hurt other people are perverting our religion. No where has our Prophet Muhammad commanded us to hurt or attack our neighbors in his name. To kill innocent people and shout out Allah Akbar is not any part of our religion. These people are distorting Islam in the worst possible way and making all Muslims appear evil.”

Anwar smiles as he looks at those sitting on the carpets before him.

“As immigrants to the United States, France, England, Russia, Sweden or Canada, any where in the West, you are responsible for integrating into that society and building that society. Do not continue watching television from Pakistan, Saudi Arabia, Iran or Syria. In the US watch US television, learn and speak English. Get to know your local community and defend it. Build it. And if anyone ever tells you different, beware. Beware that they do not speak the words of Muhammad. They speak evil and are not part of us.”

“I say this with particular emphasis to those who are young among us. The Internet is a dangerous place. It is filled with seductive voices and images demanding that you harm our neighbors. Muslims, Jews and Christians are our neighbors. We must build with them, not harm them.”

Anwar concludes: “Mohammed made it very clear in the Koran that Muslims and six tribes of Jews were responsible for building and defending Medina. Remember this and remember always that we are a people of peace. We do not attack others. We offer food, water, shelter to the stranger. This is our beloved Allah. This is the Islam we embrace.”