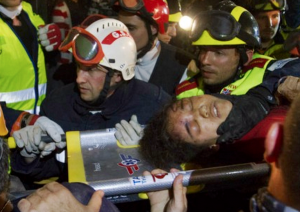 Nepal — April 30, 2015 … IsraAID’s Search and Rescue Team (SAR) in Kathmandu, Nepal has just rescued Krishna Devi Khadka, a young woman in her late 20’s who was buried alive in the debris of a hotel for five days in an air pocket covered by a body.

The complicated rescue extraction lasted for hours, with IsraAID’s SAR team leading international efforts that included SAR teams from France, Norway, and Nepal. After hours of work, the team found her and sent in the medical team from IsraAID’s Mexico-based partner CADENA to set-up an IV drip and stabilize Ms. Khadka.

When the young woman was finally extracted and carried away to a waiting ambulance, it was to the great relief of a large crowd that had gathered, bringing hope that others may still be alive.

As Ms. Khadka was sped away in an ambulance, the team returned to the building as signs of a potential second survivor were felt.

Another survivor, Pemba Tamang, was pulled out of the crushed concrete and twisted steel Thursday morning.

The 15-year-old survivor was rushed to the IDF field hospital in Kathmandu.

Tamang was virtually uninjured with just a few scrapes but not even a broken bone.

To get the attention of the rescuers, Tamang said he threw rocks at a piece of metal amid the debris.

A spokeswoman for the IDF field hospital described him as a miracle.

“It was wonderful to see him functioning, to see him speaking,” said IDF mission spokeswoman Libby Weiss. She said the young man was remarkably stable given what he’d been through, and was only treated for scrapes and dehydration.