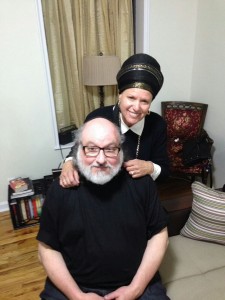 “The people of Israel welcome the release of Jonathan Pollard. As someone who raised Jonathan’s case for years with successive American presidents, I had long hoped this day would come. After three long and difficult decades, Jonathan has been reunited with his family. May this Sabbath bring him much joy and peace that will continue in the years and decades ahead.”

Israeli agent Jonathan Pollard was released from US prison early this morning after 30 years. He was released from the federal prison in Butner, North Carolina, after serving a life sentence for passing classified information to an ally.

Greeted by his wife Ester, the couple are now in New York enjoying their first Shabbat dinner together outside of a government facility, according to Pollard’s lawyer.

Pollard is not free. He was released under strict parole conditions where he has to check in with a parole officer for a year and can be returned to prison for poor behavior. He is not permitted to leave the United States for five years, to give interviews or to go online, amid other conditions that are expected to be revealed Friday.

World renowned criminal lawyer Alan Dershowitz, who represented Pollard in the past, told The Jerusalem Post that although such parole conditions were not unprecedented, they are “totally irrational and abusive.”

Two Democratic Congressmen wrote to the Justice Department last week urging US Attorney General Loretta E. Lynch to grant the request, saying that Pollard would be willing to renounce his American citizenship and never return to the United States. They noted that a spy for Cuba was allowed to renounce his American citizenship and live in Cuba in 2013 after serving his sentence.

Nachman Shai, a lawmaker from the Israeli center-left Zionist Union who heads a Parliament (Knesset) caucus that pushed for Pollard’s release, wrote in a letter to Pollard that the group would “not cease its activity until we remove the limitations imposed upon you upon your release.

“We continue to demand the removal of any restriction on your freedom of movement, communication, or other violation of your rights,” Shai wrote. “We will not rest until you are free to depart the United States for any destination of your choosing, first and foremost Israel.”

Jonathan, the Jewish nation stands with you for all you sacrificed to keep Israel safe and secure.
We look forward to welcoming you soon at Ben-Gurion Airport.