Jerusalem, Israel — June 12, 2017 … The Israel Defense Forces informed the United Nations Relief and Works Agency, the main UN aid agency in Gaza, that it had discovered part of a terror tunnel running under two of its schools in a refugee camp in the enclave.

UNRWA then condemned the existence of tunnels which were created for Hamas terror activities saying that it “objected in the strongest possible terms. It is unacceptable that students and staff are placed at risk in such a way,” a written statement said.

A Hamas spokesman Fawzi Barhoum responded and denied the tunnel belonged to his or any other Gaza terror group. The IDF then sarcastically questioned if the tunnels were built by Disney World as a future entertainment feature or was created by the good citizens of Gaza to implement advanced irrigation systems.

Responding to the discovery, Israel’s Coordinator for Government Activities in the Territories accused Hamas of “ruining Gaza.”

“It’s clear as day that the entire Arab world has realized that the Hamas terror organization is the one ruining Gaza and destroying Gazans’ chance for a better future,” IDF Maj. Gen. Yoav Mordechai said on COGAT’s Arabic language Facebook page. “Perhaps the time has come for the residents of Gaza to realize this for themselves.”

Israel Prime Minister Benjamin Netanyahu at the start of the weekly Cabinet meeting responded to Hamas Jihadi terror tunnels that were created to carry weapons and bombs into civilian communities in Israel:

“A Hamas tunnel has recently been discovered under two schools in the Gaza Strip. Hamas is using schoolchildren as human shields and this is the enemy that we have been fighting against for many years, an enemy that is committing a twofold war crime.”

“On the one hand, it first attacks innocent Israeli civilians and then hides behind Palestinian children. On Friday I instructed the Israel Foreign Ministry Director General to file an official protest against the Jihadist terror group Hamas at the UN Security Council.

Last week I met with US Ambassador to the UN Nikki Haley. I thanked her, on your behalf as well, for her sharp words in favor of the State of Israel and against the anti-Israel obsession at the UN. I told her that the time has come for the UN to reconsider the continued existence on UNRWA.”

Netanyahu added: “Since World War Two, there have been – and continue to be today – millions of refugees. And these millions have the UN High Commission for Refugees (UNHCR), while most of the Palestinian refugees are settled and have a separate commission. This is UNRWA; it has its own institutions and considerable incitement against Israel. I regret that UNRWA, to a large degree, by its very existence, perpetuates – and does not solve – the Palestinian refugee problem. Therefore, the time has come to disband UNRWA and integrate it into the UNHCR.” 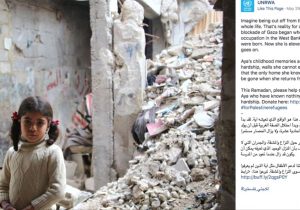 UNRWA was caught last week using a photo twice of a Palestinian child living in Syria, this time in its fund-raising campaign for Gaza.

The double use of the photograph was discovered by the Geneva based group UN Watch, whose executive director Hillel Neuer posted both pictures on Twitter with the caption: “Left: UNRWA photo, Jan.27, 2015, of girl in Syria. Right: Same UNRWA photo, May 29, 2017, but now she’s ‘Aya from Gaza’ oppressed by Israel.”

Israel removed all of its civilians and soldiers from Gaza in 2005 in return for a peace agreement. Since 2005, Hamas has attacked Israel with hundreds of mortars and missiles claiming that all of Israel was to be destroyed.