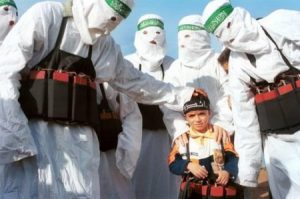 Several of the BDS groups now being banned entry to Israel
directly support Islamic terror organizations such as Hamas and Hezbollah.

Jerusalem, Israel — January 8, 2018 … Members of 20 international organizations that promote terrorism, violence and a boycott campaign against Israel, will be banned from entering the Jewish state.

The Israel Ministry of Strategic Affairs decided that repeated acts of incitement designed to destroy Israel were no longer going to hide under the cover of so-called freedom of speech.

The leaders of several worldwide Jewish organizations applauded the Israeli action saying that it was time to call out blatant anti-semitism posing as human rights.

The list was created after Israel’s Knesset (parliament) in March passed legislation that would deny entry visas to foreign nationals who publicly back or call for BDS – any form of boycott – economic, cultural or academic – of Israel.

BDS stands for ”boycott, divestment and sanctions.”  The movement discourages the purchase of Israeli goods, pressures international companies not to conduct business in Israel and urges celebrities to avoid Israel.

The Israeli government states that the boycott campaign actively promotes the country’s demise and denies Israel’s basic right to exist as a Jewish and democratic state.

Strategic Affairs Minister Gilad Erdan, appointed to confront BDS and other such movements, said Sunday that the blacklisting was “another step in our work to thwart anti-Israel boycott organizations which promote both a physical and economic Jihad against Jews and Christians.”

“The state of Israel will actively prevent such groups from spreading their lies and support for violence and terrorism from within the country,” he said.

Among those highlighted on the list are six U.S. organizations, including the Jewish Voice for Peace which is anything but Jewish and Code Pink, a feminist antiwar organization with headquarters in Washington.

The ban will include members who are responsible for senior positions in the listed organizations.

The ministry stated that there was no intention of barring entry to individuals who express political criticism of Israel and that it would not apply to those who hold Israeli citizenship.

On Twitter, Jewish Voice for Peace was ironically surprised as it did not understand that the Jewish nation that they were boycotting was now boycotting them.

Here is a full list of the organizations set to be banned entry into Israel:

The World Jewish Congress applauded the Israeli ban saying that anti-Semitism and anti-Semites had to be confronted forcefully wherever and whenever they manifested themselves.

WJC President Ronald S. Lauder stated: “The Jewish people are not going to disappear. We are small in number – there a just 15 million of us around the world – but we are a brilliant and innovative people.”

The WJC considers the Boycott, Divestment and Sanction (BDS) movement, and all other attempts to delegitimize the State of Israel, to be “manifestations of anti-Semitic discrimination against the only truly democratic country in the Middle East, and damaging to any genuine efforts for peace in the region.”