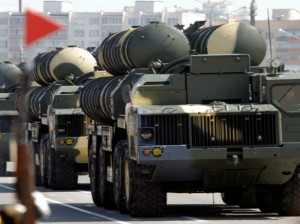 Jerusalem, Israel — April 20, 2015 … Israel Prime Minister Benjamin Netanyahu made the following remarks at the start of the weekly Cabinet meeting:

“Israel views with utmost gravity the supply of S-300 missiles from Russia to Iran, especially at a time when Iran is stepping up its aggression in the region and around the borders of the State of Israel.

Netanyahu added: “Yesterday we saw the military parade in Tehran and Iran’s exhibition of weapons to the world. Every year the missiles are bigger and enhanced – in accuracy, strength and deadliness; however, one thing does not change. What does not change is the inscription ‘Death to Israel’ on the missiles. Against the threats that I have described, Israel will do whatever is necessary to defend the security of the state and its citizens.”

Russia’s decision to sell the S-300 to Iran will shift the military balance in the Middle East.

It represents a fundamental shift in military power for the region. For over a decade, the United States and its allies have been able to take freedom of action in the Middle East. Friendly forces could count on air support and freedom of maneuver. Adversaries could assume they were vulnerable to observation and attack from the air, limiting their options and convincing some of them that they could not achieve their objectives through military force (often called deterrence by denial). This was especially true of Iran, whose air defenses have suffered greatly due to sanctions. The arrival of the S-300 changes this.

Overcoming this type of advanced, missile system will require a large deployment of air, sea, and land assets, including the most capable—and expensive—airplanes and missiles. People and equipment will be at greater risk, and accomplishing the mission will be more difficult and time consuming.

It represents a major acceleration in the proliferation of A2/AD systems. In 2003, Andrew Krepinevich, Barry Watts, and Robert Work warned against the proliferation of threats like the S-300 in a study published by the Center for Strategic and Budgetary Analysis that coined the phrase “Anti-Access/Area-Denial,” or A2/AD. They argued that terror states such as Iran and North Korea would acquire capable systems like the S-300, forcing the United States to alter its approach to projecting military power.