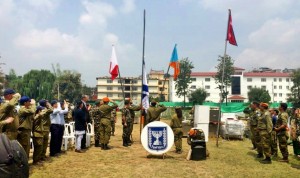 Nepal — May 10, 2015 … The IDF rushed to save lives in Nepal, but packed their clothes slowly today as they prepared to leave this earthquake shattered nation.

“Today the IDF completed its mission in Nepal. The mission consisted of 260 search and rescue and medical personnel and 95 tons of humanitarian and medical supplies,” said IDF Spokesperson Lt. Col Peter Lerner.

“The field hospital, which was operated for 11 days, treated 1600 patients, conducted 85 life-saving surgeries and delivered 8 babies.”

Not one of the doctors, nurses and paramedics of the IDF wanted to leave Nepal. Nor did the Nepalese government want them to leave. The local government pleaded with the head of the IDF Humanitarian Field Hospital to remain open one more week. But the IDF, as much as it wanted to stay and treat hundreds more, had their hands tied by the Israeli Treasury Ministry which would not allow any more monies to the mission.

Israel has a large heart but must place it’s monies first and foremost for it’s defense against Islamic Jihad.

At a small ceremony to mark the closure of the IDF Field Hospital, Nepal’s Urban Development Minister Narayan Khadka expressed the Nepal government’s gratitude to Israel for its help.“Let me express our sincere gratitude to the government of Israel and to the people of Israel for helping us in times of very critical hours for Nepal,” Khadka said.

IsraAid has told the Israel News Agency that they will remain treating the wounded and sick. IsraAid presently has several search, rescue and medical teams in the high lands.

Israel’s ambassador to Nepal, Yaron Mayer, said he was optimistic about the nation’s future.“I did mention that Nepal is crying and the whole world is crying, but I also said that I am optimistic for the future and looking ahead, things are now starting to rebuild. It will take time I know, but things will be better and Nepal will be stronger and we will be united working for these challenges,” Mayer said.The quake has affected 8 million of Nepal’s 28 million people, with at least 3 million needing tents, water, food and medicines over the next three months, the United Nations said. Over 519,000 houses have been damaged or destroyed.