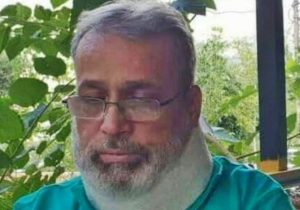 Jerusalem, Israel — August 5, 2018 … A Syrian scientist who was responsible for a research center related to the development of chemical weapons was killed in a car accident, according to Syrian reports early Sunday.

Aziz Azbar, the head of the Syrian Scientific Research and Studies Center in Masyaf, died along with his driver  Saturday night.

The deaths were reported by several Syrian and Lebanese news outlets as well as the UK-based Syrian Observatory for Human Rights war monitor and a Facebook page purportedly linked to the Syrian military.

Asber’s death was claimed by a Syrian rebel group affiliated to Tahrir al-Sham. It includes the group formerly known as the Nusra Front, which served as al Qaeda’s Syrian branch.

The Abu Amara Brigades released a statement on their Telegram online channel that said they “planted explosive devices” which detonated and killed Asber.

Azbar was close to both Syrian President Bashar Assad and the Iranian regime, which was thought to be using the facility for arms development, according to the observatory.

The Scientific Research and Studies Center in Masyaf, also known by its French acronym CERS, has been the target of at least two reported air attacks blamed on Israel, including one in late April said to have killed a number of Iranians.

Western security and defense officials have long associated CERS with the production of chemical weapons. Reports have also indicated an Iranian missile operation at the site.

After the July strike on the site outside of Hama in northern Syria, the observatory said the air attack had targeted a “workshop supervised by Iranians where surface-to-surface missiles are made.”

Israel never comments on reports of airstrikes in Syria but has stated it would work to keep advanced weapons out of terrorists’ hands and has vowed to stop Iran from gaining a military presence in the country. 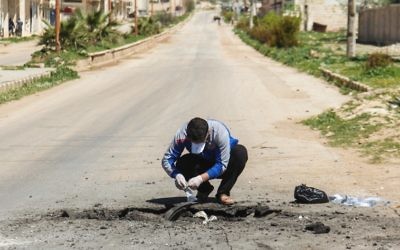 A Syrian man collects samples from the site of a suspected toxic gas attack in Khan Sheikhoun, in Syria’s northwestern Idlib province.
Photo: AFP/Omar Haj Kadour
In April 2017, the US placed sanctions on hundreds of CERS employees following a chemical attack on the Syrian rebel-held city of Khan Sheikhoun that murdered dozens of civilians, including children.

Another CERS facility near Damascus was bombed by US, British and French forces in April after another chemical attack.

Syria has been accused of dozens of CW gas attacks that have killed hundreds of civilians during the war, even after it said it was giving up its stockpile. 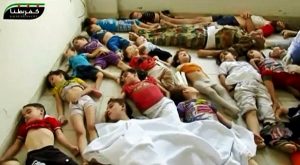 A senior member of the Syrian opposition, citing security officials still working for the regime at the time, told The Times of Israel in 2014 that Assad’s forces were stockpiling chemical substances and missiles carrying chemical warheads at the site, which was not made available to international inspectors tasked with ensuring the destruction of the weapons.

Iran’s Press TV blames Israel for Asbar’s death. It noted that on July 22, the Masyaf facility was struck by a missile, which it also blamed on Israel. “Dr. Isbir was not present at the site,” Press TV claimed. How they would know that is unclear, unless of course members of the scientist’s staff told the Iranians or pro-Iranian media these details.

In 2012, Iranian scientist Mostafa Roshan was killed when his Peugot 405 was blown up in Tehran. He was a deputy director of a unit at the Natanz uranium enrichment center and Hezbollah commander Imad Mughniyah was killed in a car bomb in 2008 in Damascus.