By ERIK LARKSON and CHRISTIE SMYTHE 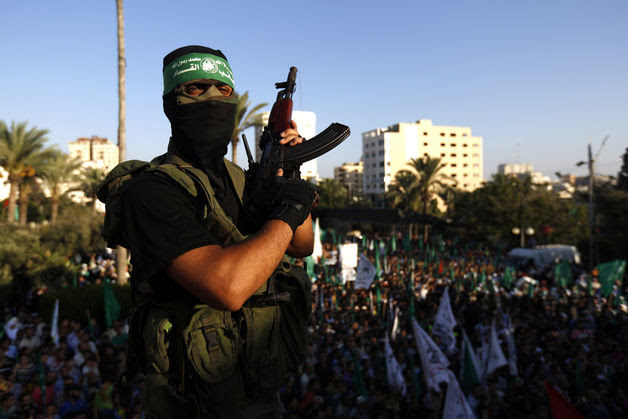 Arab Bank Plc, Jordan’s biggest lender, helped Hamas militants carry out a wave of violence in Israel that killed and wounded hundreds of Americans, a New York jury decided in the first trial of its kind in the U.S. The company’s shares tumbled.

The Amman-based lender was found liable for doing business with more than 150 Hamas leaders and operatives in the early 2000s, helping finance about two dozen deadly suicide bombings, including attacks on crowded restaurants and buses in Tel Aviv and Jerusalem, jurors decided yesterday in federal court in Brooklyn, New York. The shares dropped 5.6 percent to 7.32 dinars at 11:17 a.m. local time, the biggest decline in more than a month.

“The verdict is an incredible message that should be understood and heard by the entire financial community — if you do business with terrorists, you can be held liable” in the U.S., Michael Elsner, one of the plaintiffs lawyers, said in a phone interview.The case highlights the ways banks can play a role in funding terrorist groups and the extent to which they can be held responsible for monitoring their customers, even those who aren’t on government lists of terrorists. Credit Lyonnais SA and Bank of China Ltd. are facing similar cases in the U.S., alleging they served as conduits for terrorism financing.

David Miller, a former Manhattan prosecutor who worked on terrorism cases for the U.S. Justice Department and isn’t involved in the Arab Bank case, said the verdict may result in follow-up lawsuits.

The outcome sends “a powerful message to financial institutions of their continuing obligation to know their customers,” said Miller, now a lawyer at Bingham McCutchen LLP in New York.

The plaintiffs, about 300 victims of the attacks or their relatives, are seeking unspecified damages from Arab Bank that will be decided at a separate proceeding. The trial was the first against a bank on civil claims of violating the U.S. Anti-Terrorism Act, making the verdict a potential industry landmark.“There’s a huge sense of relief — it is an amazing verdict,” said Joshua Faudem, a 39-year-old

Detroitnative who was injured in a suicide attack on Mike’s Place bar in Tel Aviv on April 30, 2003. “This is a huge wake-up call, not just for banks, but for all big businesses, to wash their hands of these kinds of clients.”

The verdict was handed down the same day a federal appeals court in Manhattan revived a similar suit filed by about 200 Hamas victims against National Westminster Bank, accused of maintaining accounts and transferring money for an alleged Hamas fundraiser, the Palestine Relief & Development Fund.The court reversed a lower-court dismissal of the suit, filed in Manhattan federal court, ruling that it had used the wrong standard to determine whether NatWest, a unit of

Royal Bank of Scotland Group Plc, knew it was supporting a terror group.“Obviously this case is a long way from over,” U.S. District Judge Brian Cogan, who oversaw the Arab Bank case, said to lawyers after the verdict was delivered yesterday. “We have not finished our work by a long shot.”

The victims linked Arab Bank to 24 terror attacks, including a suicide attack on Holocaust survivors celebrating Passover at the Park Hotel in Netanya, Israel, in 2002, which killed about 30 people and wounded more than 100.

A jury of eight women and three men deliberated fewer than two days before reaching the decision that the bank was liable on all 24 counts linked to the separate attacks.

Arab Bank will appeal the verdict because the judge’s instructions were “erroneous” and mistakes were made in determining which evidence would be allowed, Shand Stephens, a lawyer for the bank, said after the verdict.

“The plaintiffs evidence in this case is a mile wide and an inch deep,” Stephens told reporters outside the courtroom. “The Second Circuit is going to reverse this,” he said referring to the appeals court in New York.The events at the center of the trial took place during the Second Intifada, a five-year Palestinian uprising in Israel that began in 2000 and resulted in thousands of deaths, including hundreds of civilians on both sides of the conflict. Non-U.S. victims were barred from joining the case.

Lawyers for Arab Bank told jurors during closing arguments on Sept. 18 that the lender followed international banking rules and that most of the accused customers weren’t designated as terrorists by the U.S., the United Nations or the European Union. The only customer who was a designated terrorist, Hamas leader Sheikh Ahmed Yassin, slipped through the bank’s systems due to a spelling error, the lender argued.

Victims also targeted the bank’s business relationship with The Saudi Committee for the Support of Intifada Al Quds, which was formed to pay the costs of the uprising. The organization used the Arab Bank as a “paymaster” to pass on stipends of more than $5,000 to families of suicide bombers and other terrorists, according to the plaintiffs.
Shukry Bishara, the Palestinian finance minister and a former executive at Arab Bank, testified on Sept. 11 that the lender made payments in the Palestinian territories to provide humanitarian relief, not compensate families of suicide bombers.

Witnesses for the plaintiffs testified that Hamas was probably behind all the attacks at issue in the case, which included deadly 2001 bombings at a beach-front discotheque in Tel Aviv and a Sbarro restaurant in Jerusalem, as well as the 2003 bombing of a bus carrying families returning from prayers at Jerusalem’s Western Wall, also known as the Wailing Wall.

Other militant groups in the region claimed responsibility for some of the attacks and may have been responsible, lawyers for the bank said in questioning the witnesses. Hamas was designated a terrorist group by the U.S. in 1997.Arieh Spitzen, the former head of the Israeli military’s Department of Palestinian Affairs, told jurors in August that the bank transferred about $4 million from 2000 to 2001 to as many as two dozen Hamas leaders and operatives through its New York branch.

Spitzen said he was only able to review limited account information because the bank refused to hand over much of the data. The bank has argued it couldn’t supply more comprehensive information without violating criminal laws of Jordan, Lebanon and the Palestinian territories. A federal judge ruled jurors could be told to infer from the bank’s failure to provide the information that it did business with terrorists, giving the plaintiffs a potential edge.

Arab Bank fought all the way to the U.S. Supreme Court to resist sanctions over its refusal to provide the account records to victims. In June, the high court rejected the bank’s appeal.

Arab Bank Chairman Sabih Al Masri, testifying for the company, said the attacks “destroyed opportunities for peace” and denied ever hearing that the bank supported terrorism. Al Masri, who took over management of Arab Bank in 2012 after former Chairman Abdul Hamid Shoman resigned, told jurors his brother was killed by a terrorist and his own life had been threatened because a company he owns supplied food to U.S. troops in the Middle East.The bank said a verdict for the plaintiffs would “undermine” the compliance systems used by financial institutions throughout the world and would “create vast uncertainty and risk.”

Founded in Jerusalem in 1930, Arab Bank grew to a network of 600 branches in 30 countries, according to its website. Committed to re building the Palestinian economy, it “emerged as the main vehicle for the payments by the international donor community,” Bishara said in a court filing.The bank opened a branch in New York in 1982, according to Bishara. In 2005, itagreed, without admitting wrongdoing, to pay a $24 million penalty to U.S. regulators over alleged failure to enact sufficient controls and adequately manage risks of money laundering and terrorist financing.The branch is no longer considered active, according to the U.S. Federal Deposit Insurance Corporation website. The bank said in a financial report that it converted the branch to a different form of office with limited operations.

The penalty was a “great disappointment to Arab Bank,” Bishara said in a 2005 statement. He said the bank agreed to pay the penalty “in order to put this matter behind us.”