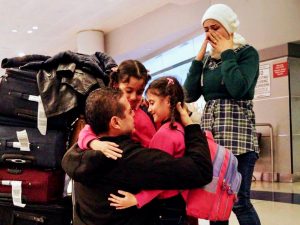 New York, NY, February 6, 2017 … The Anti-Defamation League (ADL) today filed an amicus (friend of the court) brief with the U.S. Court of Appeals for the 9th Circuit supporting the State of Washington’s challenge to President Donald Trump’s Executive Order on immigration and refugees.

“When America has closed its doors and allowed its core values to be compromised, the country later looked back in shame,” said Jonathan A. Greenblatt, ADL CEO.

“When we stray from our core principles, we are left to apologize to individuals and their descendants who had suffered, and posthumously to those who have tragically lost their lives as a result. This case reminds us to fulfill the promise of learning from our mistakes.”

The brief traces America’s history as a nation dedicated to ideals of equality, liberty and justice, noting that throughout U.S. history, and often with respect to immigration, our ideals have been tested. “Sometimes the nation has risen to the challenge,” the brief observes, but at other times, “when prejudice and fear predominate over reason and compassion, we falter, often with devastating consequences.”

“America has always been at its best when it opens its doors to refugees and immigrants,” the brief notes, while citing several examples in history where the nation did not live up to the ideal of America as a nation of immigrants.

“Our country is at its best when it honors its commitments to its core values,” said John Harris, ADL Legal Affairs Committee Chair and primary author of the ADL brief. “This nation has been and should be a beacon of hope for refugees from war-torn countries and for victims of persecution.  Many of these refugees have contributed immeasurably to the fabric of America.”

The brief concludes that enforcing the Executive Order “risks once again sacrificing the nation’s core values in favor of prejudice and fear – a sacrifice that history has repeatedly proven has profound consequences both to the persons who suffer as a result and to the still-vibrant vision of the shining city on the hill.”

The Anti-Defamation League, founded in 1913, is the world’s leading organization fighting anti-Semitism through programs and services that counteract hatred, prejudice and bigotry.

In related news, HIAS – the Hebrew Immigrant Aid Society will be hosting a Jewish Rally For Refugees on Sunday, February 12, from 11 A.M. at Battery Park in downtown New York.